I am an expert in sanitary engineering. Especially in the field of water, I have been doing research that does not fall behind. I also worked on various water-related technologies. Here, a blog covered some kind of water purification technology. Looking at what kind of thing it is, somehow from the lapilli, "Since the components that rejuvenate the microorganisms flow out, this will rejuvenate the microorganisms, expect water purification, and give back to the earth." That's right? ... I'm scared because this is what amateurs think. If we can purify water with such a small item, we don't need water treatment technology, and you don't need sanitary engineering. The sanitary engineering is explained as follows.

A discipline that applies engineering principles to the prevention of environmental pollution and the conservation of the living environment with the aim of protecting and promoting public health. Since the causes that threaten people's lives and health change with the development of civilization and society, the objects of purpose-oriented sanitary engineering are also purification of air and water from urban water and sewage, noise vibration control, industrial waste control. , Final waste management, radioactive emission management, air conditioning heating and cooling of buildings, control of working environment in factories, planning of local material metabolism facilities, planning and management of air, water and soil environment, location planning, etc. .. The academic fields necessary for this are also (1) physiology, public hygiene, animal and plant ecology, flow science, meteorology, statistics, etc. to set improvement or conservation goals, and (2) civil engineering to take improvement measures. Engineering, chemical engineering, microbial engineering, fluid engineering, thermal engineering, system engineering, etc. (3) Planning mathematics, regional planning, urban planning, economics, etc. for making plans. After World War II, the Department of Sanitary Engineering was established at Hokkaido University and Kyoto University, the Department of Urban Engineering at the University of Tokyo, and the Department of Environmental Engineering at Osaka University. Other universities have related courses in the Faculty of Engineering. 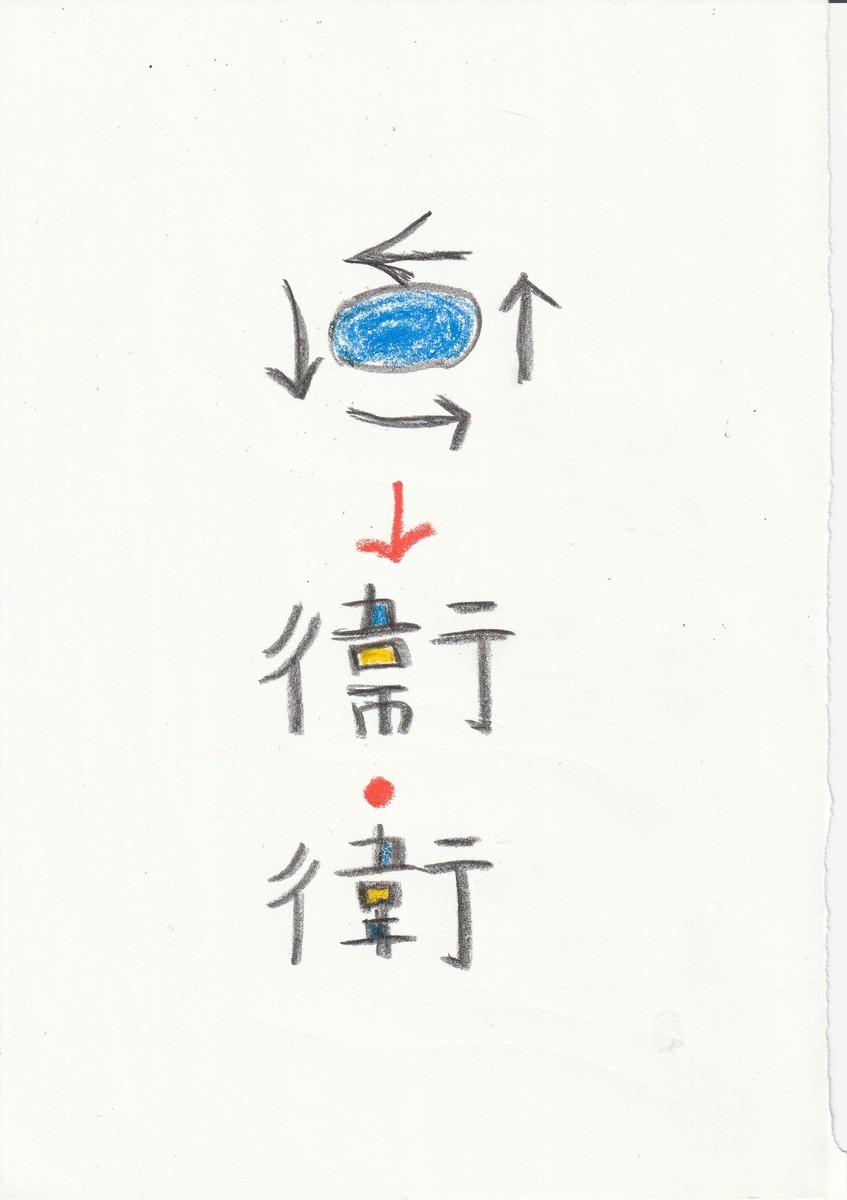 (Note: The etymology of "defend(衛) "is "a soldier who patrols to protect the one in the middle.")

Well, when I chose sanitary engineering as my career path, I didn't really understand the content, but I was depressed at that time and was told that it was a "dirty place" dealing with "shit, pee". While I was depressed, I decided to go to a dirty place and went on to throw it away. In the above explanation, it is said that there are a wide range of applications, but at the time of my time, the main problem was water, and research was concentrated on waterworks, sewers, rivers and lakes.

Regarding sewage treatment, it is difficult to treat sewage by participating in a project (by students) to check the performance of Jun Ui's "oxidation ditch", which is an evolution of the traditional "activated sludge method". As a premise, sewage treatment is said to be "accepting any wastewater, purifying the water quality properly, and is evaluated for the first time". The maintenance of a plant (facility) is a place where water treatment engineers play a serious role. At sewage treatment plants, activated sludge, a group of microorganisms derived from soil, actively "eats" organic matter in sewage and plays a role in water purification, but that alone is enough to purify water. Is on the way. In addition to organic substances, there are substances that require more advanced removal techniques, such as nitrogen (N) and phosphorus (P). If you try to process it, it will cost a lot.

This is the current state of sewage treatment. What can we say when we look at the goods from that perspective?

What is XXXXX? (Author's note: Hidden words)
A microbial activator made mainly from lapilli.
XXXXX will use the microorganisms on the spot as the source, and Mr. microorganisms that have become the source will decompose the dirt.
Just place XXXXX on the flush tank of the toilet, and the flowing water will rejuvenate the Mr. microorganisms.Every time you flush the water in the toilet, the flow of water from the sewage to the river and the sea becomes beautiful.
You can give back to Mr. Earth just by putting it in your toilet!

(From a certain blog. I have something to think about, so I'll keep it anonymous.)

A word of the day: In the first place, thinking about environmental issues on the premise of using a flush toilet is a . Human humiliation. In the first place, we should think about the waste of energy of diluting the solid substance "Unko :shit" and treating it with water to make the activated sludge solid again. You've never heard of a composting toilet that can compost "shit" and "pee", because this person is an amateur. (Apart from that, I don't have a grudge against this blogger, but I was inspired by so much error that I wrote this blog.)

Currently, there is no "sanitary engineering" or "sanitary course" in the Department of Urban Engineering, Faculty of Engineering, University of Tokyo. It seems that it calls itself an "environmental science course". Somehow, it is a name that feels "beauty". I think the original "hygiene" = "protecting life" is a more direct and better name. Well, I think that the people involved in the name change should have thought that it would be better to be neat, and I think that there are many University of Tokyo students who are attracted to the "superficial" coolness. When I was there, most of the students shy away from being dirty because they deal with "shit" and "pee".

(It seems that you can not connect well from here. You can find it by copying this URL and doing a separate Google search.)

Mr.Jun Ui, who is now dead and was a leader in pollution problems (and one of my teachers: an assistant in the Department of Urban Engineering, Faculty of Engineering, University of Tokyo), was a versatile person, but he went to see a sewage worker in Delft, the Netherlands. He visited the treatment plant, became interested in the facility: Oxidation Ditch (translated into Japanese, "Oxidation Groove"), and stayed for several days to observe it. According to the engineer who developed it, "Many Japanese researcher visit this facility, but no one else stays and observes for a long time like you."

Jun Ui understood the principle of this oxidation ditch, and he himself built a sewage treatment plant for individuals and groups that he understood in order to spread this technology to Japan, and conducted demonstration experiments. I have been involved in it for a while.

The basis of sewage treatment technology is the decomposition of "organic matter" in water. Organic matter is a molecule formed by carbon atom (C) as a nucleus, but there are almost infinite types of this molecule. Sugar, soy sauce, gravy, manure ... there is no limit to the number. Anyway, it is a process of sending oxygen (O) in the air into water, reacting it with organic matter, converting it to carbon dioxide (CO2), and returning carbon to the air. It is called aeration or oxidation.

This method, now called the "activated sludge method," introduces healthy microorganisms in the soil into the water and completes the oxidation by the action of these microorganisms. Certainly, organic matter can be decomposed fairly well in this process. However, sewage cannot be completely purified by itself. Pollutants other than carbon include nitrogen (N) and phosphorus (P). These are difficult things. Even if organic matter is removed and the water looks clean at first glance, if N, P, etc. remain, they will come out into the environment, and algae etc. will propagate using these as minerals, and organic matter will be produced again. The water is polluted and the precious oxidation becomes meaningless.

At this time, the sewage treatment technology shows two directions. One is the "continuous" process and the other is the "batch type" process. The continuous method is the current mainstream sewage treatment method in which sewage flows out of the plant and new sewage always flows into the pond. Therefore, multiple ponds are set up, and one pond "has only one function." On the other hand, the batch type has multiple functions in one pond. It has four functions of "inflow, stirring, precipitation, and outflow". Jun Ui chose this batch type, not to mention the oxidation ditch (oxidation groove).

The process of removing C is called (primary processing), but in the case of a continuous system, the process of removing N and P is processed in the second and third ponds that specialize in N and P. (Secondary and tertiary processing). In particular, in the case of N, activated sludge deprives HNO3 of O from N, which has changed from ammonia (NH3) to nitric acid (HNO3) as a result of treatment and oxidation without adding O, and N becomes N2 in the air. It will come out (denitrification). This is a chemical reaction called reduction, which is the opposite of oxidation. To remove N, it is necessary to repeat these two reactions. However, in the case of the continuous type, since a large amount of O has already been added and aerated, there is a lot of waste in removing it, and oxygen deficiency and oxygen excess are repeated, resulting in a high cost of sewage treatment. It will jump up. Indeed, sewage treatment is a gold eater. Think about it, the power that an air conditioner takes to drive air is enormous, but if it's water, the cost of sewage treatment is even higher. 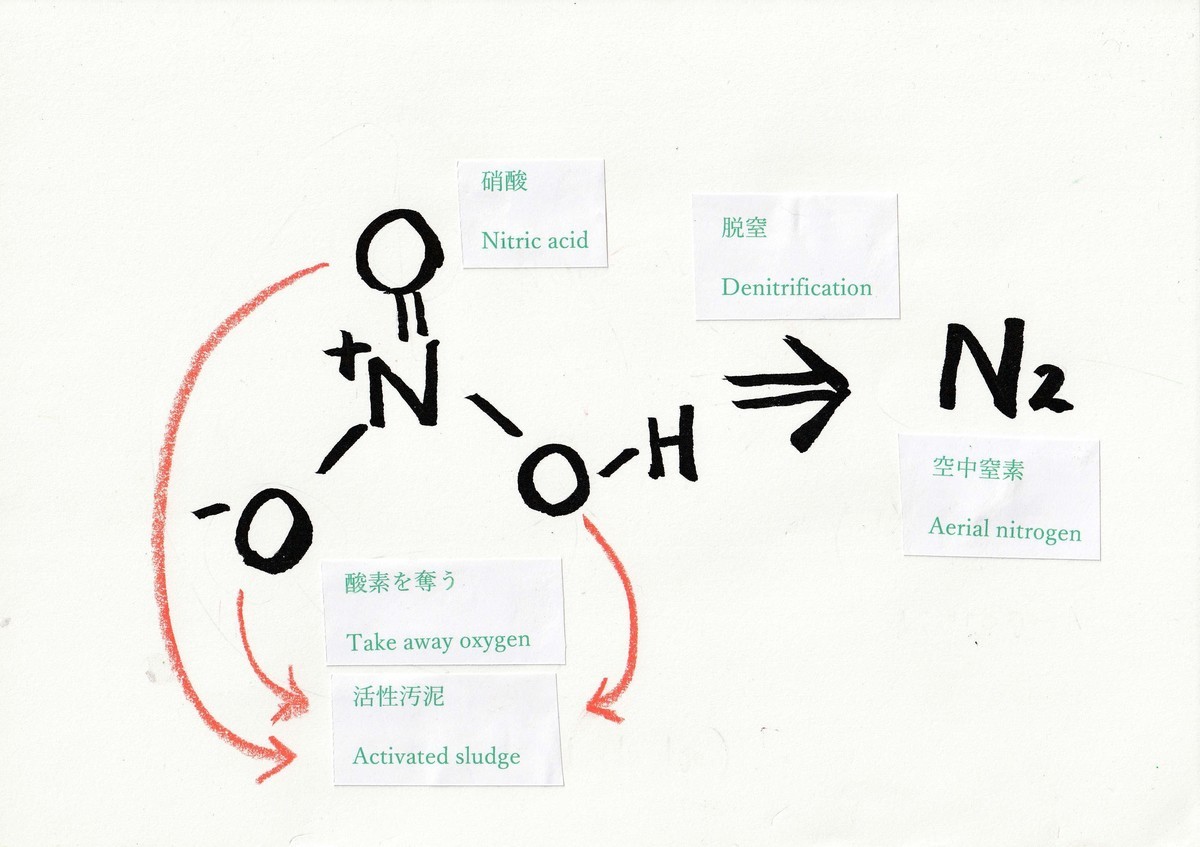 In the case of the batch type, depending on the operation, all of the first, second and third processes can be performed in one pond. By performing the steps of aeration (stirring) and precipitation, the above-mentioned denitrification controls the oxygen concentration to the limit of oxygen concentration that can be changed into two steps at any time, and the pond is as shallow as a "groove". Aeration can be done with the "eel farming water wheel". Also, because it is shallow, it will not drown even if a child gets stuck. A major feature of the batch system is that the inflowing sewage and the substances and microorganisms contained in it will "always" remain in the pond, although they will gradually dilute. These are favorable features in terms of the stability of the treated water. And here is the advantage over continuous process.

More troublesome than N is P. Basically, the most basic and reliable treatment method for P, which cannot be flown in the air, is to take out a certain amount of activated sludge itself, which contains a large amount of it, from the pond and separate it from the water. Primitive is primitive, but if sludge can be returned to the soil, this is the best. Well, the same is true for C and N. In that sense, neither the continuous type nor the batch type can fully function under the current situation where sewage contains a lot of harmful substances. Things that cannot be returned to the soil.

A word of the day: C, N, P are originally fertilizers for growing plants. If you return the wastewater and manure to the farmland without modern sewage treatment, no problems will occur. In this respect, humanity's thinking is insanely stupid.